Before starting to plan or trying to troubleshoot Tunnel connections for Per-App or Device Tunnel use cases, it is important to understand how the Workspace ONE Tunnel app connects to a resource. This can help determine the best architecture, understand the traffic flow, network ports, and help in troubleshooting.

Purpose of This Guide

This guide focuses on the connections between Workspace ONE Tunnel app and Tunnel Service on Unified Access Gateway, and how this understanding can be applied to set up a load balancer and troubleshoot connection issues between both.

The core components of Workspace ONE that are used in a Tunnel connection are described in the following table:

DTLS and TLS Connection for UDP and TCP Traffic

This chapter provides in-depth details on the Tunnel communication over DTLS and TLS.

Authorized (allowed list) applications on the device all share this single TLS connection.  For example, Chrome is added to the Device Traffic Rules (allowed list) when configured for Per-App Tunnel traffic and can start 4 TCP connections to different hosts. In this case, the Workspace ONE Tunnel app establishes flow #1, 2, 3, and 4, and tags each connection with a flow ID. Tunnel Service uses the same flow IDs to identify the connections. This way, data between Workspace ONE Tunnel app and Tunnel Service can be identified and transmitted in both directions using the established TLS channel.

This also applies to UDP traffic, so both TCP and UDP traffic are tagged with flow IDs and handled similarly.

An optional DTLS channel can be established between the Workspace ONE Tunnel app and Tunnel Service to handle UDP traffic. This allows real-time data such as video or voice to be handled in a more timely fashion, avoiding TCP resend delay between Workspace ONE Tunnel and Tunnel Service. The TCP resend delay can create an echo-like effect for voice and video delays. In this case, opening UDP will switch video traffic when carried by UDP to DTLS to reduce the TCP resend problem. Once a DTLS channel has been established, it sits parallel to the TLS channel and handles only UDP traffic.

In the previous example, if Chrome flow #3 and #4 and Remote Desktop Client #7 are UDP, they will be transmitted through the DTLS channel instead of TLS (see Figure 2 below).

When using a load balancer to handle DTLS channel, the DTLS channel must be connected to the same Unified Access Gateway's Tunnel Service handling the TLS channel because both channels need to be handled as a pair.

DTLS channel is encrypted just like TLS and has a TLS session ID, so all persistence rules applied to TLS should also apply to DTLS channel.

Figure 3: Communication from Tunnel Service front-end to back-end through TLS Channel only

For production deployments, a load balancer is required for any Unified Access Gateway Edge Service. In the case of Tunnel Service, some specific requirements are required to allow the Workspace ONE Tunnel app to establish a TLS and DTLS connection to the Tunnel Service.

The firewall must allow the TCP and UDP traffic in and out of the Unified Access Gateway TCP and UDP listing port. For example, if the Tunnel Service is set up to listen on port 443, the TCP and UDP port 443 must be opened at the firewall to allow all the incoming connections from the devices.

Keep in mind that the Unified Access Gateway HA (supporting on the VIP up to 10,000 concurrent connections) feature can be leveraged to balance Tunnel Service traffic when:

If both criteria cannot be achieved, an external load balancer is required, such as VMware Advanced NSX Load Balancer or any third-party load balancer.

This chapter provides detailed guidance on the load balancer requirements for Tunnel Service.

Before diving into the load balancer requirements, the following checklist contains the recommended load balancer settings to properly handle the Tunnel traffic on Unified Access Gateway.

Some level of persistence should be maintained so the TLS channel can remain intact for the duration of the TLS session, since Tunnel Service maintains a timer and will disconnect the TLS channel once the on-demand timeout has been reached. Timeout settings at load balancers should be set to disabled and should let Tunnel Server determine when to disconnect.

When UDP traffic is allowed on the firewall and the load balancer is able to handle DTLS channel, the DTLS channel must be connected to the same Unified Access Gateway's Tunnel Service handling the TLS channel, because both channels need to be handled as a pair. Session Persistence for the UDP protocol is required.

SSL Offloading and SSL re-encryption are not supported and must be turned off. This is because Tunnel uses a certificate pinning between the client and server-side, creating an end-to-end encrypted tunnel that does not allow SSL manipulation. The encrypted tunnel between client and server can only be decrypted by the tunnel service on the Unified Access Gateway appliance. All TCP and UDP traffic to the Tunnel Service must be allowed to pass through to the Unified Access Gateway appliance.

Traffic can only be inspected after the Tunnel Service forwards the traffic into the internal network. For cascade mode deployment, this is after the back-end.

To achieve that, configure the load balancer Health Check URL setting to perform an HTTPS GET on /favicon.ico on each of the Internet IP addresses of the Unified Access Gateways deployed. The response could be:

Unified Access Gateway can be put into Quiesce Mode, after which it will not respond to the load balancer health monitoring request with an HTTP/1.1 200 OK response. Instead, it will respond with HTTP/1.1 503 to indicate that the Unified Access Gateway service is temporarily unavailable. This setting is often used prior to scheduled maintenance, planned reconfiguration, or planned upgrade of a Unified Access Gateway appliance. In this mode, the load balancer will not direct new sessions to this appliance because it will be marked as unavailable, but can allow existing sessions to continue until the user disconnects or the maximum session time is reached. Consequently, this operation will not disrupt existing user sessions.

The appliance will then be available for maintenance after a maximum of the overall session timer, which is typically 10 hours. This capability can be used to perform a rolling upgrade of a set of Unified Access Gateway appliances in a strategy resulting in zero user downtime for the service.

The administrator can configure Quiesce Mode using the Unified Access Gateway Admin UI under System Configuration or via REST API.

When using Tunnel Service in cascade mode, a load balancer mechanism is required between the front-end and back-end. Two methods can be used:

For example, backend.example.com can be set up as the back-end hostname on Workspace ONE UEM Tunnel Configuration to resolve to the following two Unified Access Gateway IP addresses:

During initialization, the front-end determines how many back-end IP addresses can be resolved, and if there are more than one, it puts the addresses in a list. During operation, for each new device connection, the front-end picks the next one in the list in a round-robin fashion.

Figure 4: Load balancing between front-end and back-end through DNS Round Robin

When using DNS round-robin, the front-end needs to detect and skip the offline back-end appliance. Failing to detect an unreachable back-end will cause every other device connection to fail in our example.

The cascade_health_check_interval setting must be configured to control the check intervals. The administrator can configure that in Workspace ONE UEM Console under the Tunnel Configuration / Custom Settings. Once set, the front-end will perform TCP Ping to the back-ends. If a back-end is unreachable, it will be marked as down and skipped.

The cascade_health_check_interval value is defined in seconds. When not defined or set to 0, the health check between front-end and back-end is turned off. 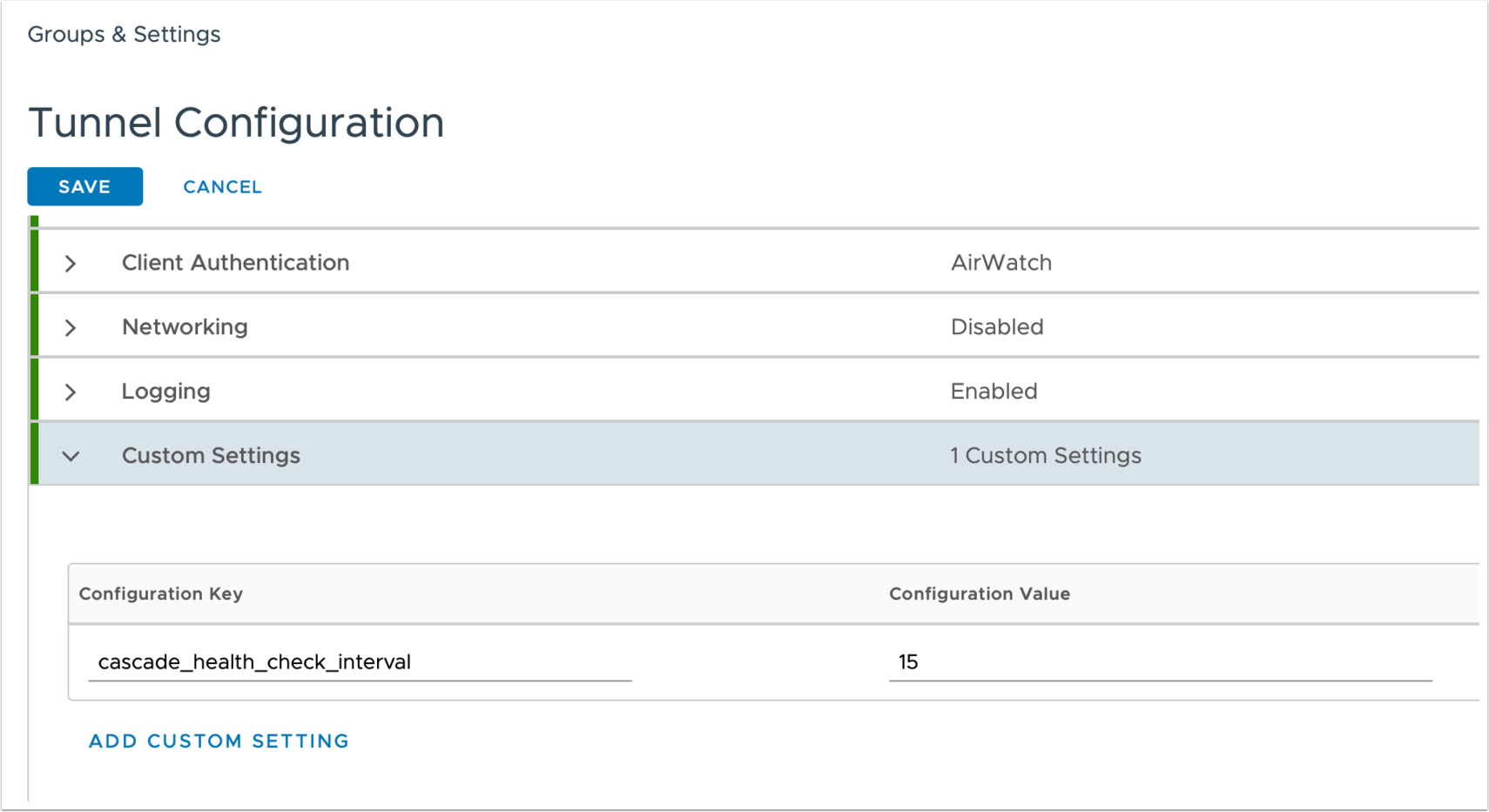 Figure 6: Load balancing between front-end and back-end through Load Balancer

There are multiples ways to validate. If a user is able to access internal/external applications through Workspace ONE Tunnel, the ultimate test consists of enrolling a device and launching the applications that will tunnel traffic to a specific domain defined on the Device Traffic Rules. However, a simple test via the openssl command can help to validate the communication between the Device and Tunnel Service on Unified Access Gateway, depending on the network that the device is connected to. You will also be validating the connection through a load balancer or directly into Unified Access Gateway when on the internal network. Open SSL can be downloaded from here.

To ensure Tunnel Service and Unified Access Gateway are properly configured, it is recommended to perform the openssl test from a device connected as follows:

INTERNAL TEST - From an endpoint (Windows, macOS, or others) connected to an internal network, execute the following openssl command replacing the parameters between <> with the respective values:

EXTERNAL TEST - From an endpoint (Windows, macOS, or others) connected to the Internet, execute the following openssl command replacing the parameters between <> with the respective values:

The expected result is the Tunnel Certificate followed by the message: "Acceptable client certificate CA names". 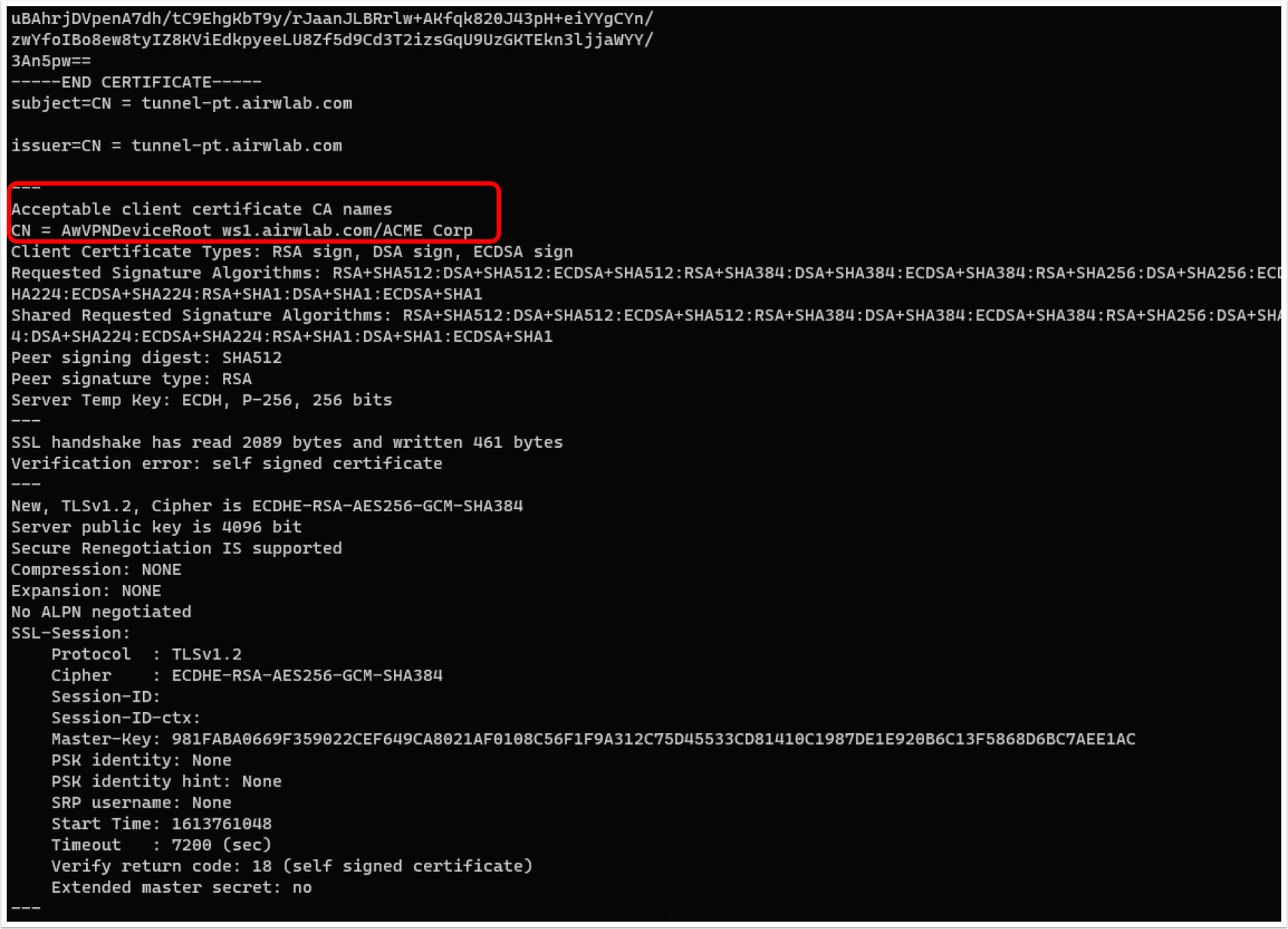 Output results that indicate a load balancer configuration issue include:

The following command executed from the Front-End appliance will validate if both appliances are able to communicate, displaying connect as output response:

A simple curl command from the Unified Access Gateway console can help you to determine if the internal resource is reachable:

A successful connection returns a connected status and HTML response for the respective website. Otherwise, a "Connection refused" error is raised, as in the following image:

For more information about Workspace ONE Tunnel connections, you can explore the following resources:

About the Authors and Contributors

This tutorial was written by:

With significant contributions from:

The following updates were made to this guide:

Your feedback is valuable.