Back when I was on the AirWatch Sales Engineering Team, I was occasionally asked whether it was possible to enroll and manage Linux endpoints alongside Android, iOS, Windows, and macOS devices. But this request was rare because so was Linux in the enterprise other than servers. Since then, this has changed dramatically, with the rise of Linux for developer workstations and the ever-increasing number of Internet of Things (IoT) endpoints connected to the network. As the Linux ecosystem continues to expand, it is critical that organizations have a strategy in place for securing, configuring, and supporting Linux endpoints remotely. And as of last year, I’m proud to say—yes, VMware Workspace ONE does in fact support Linux endpoint management. 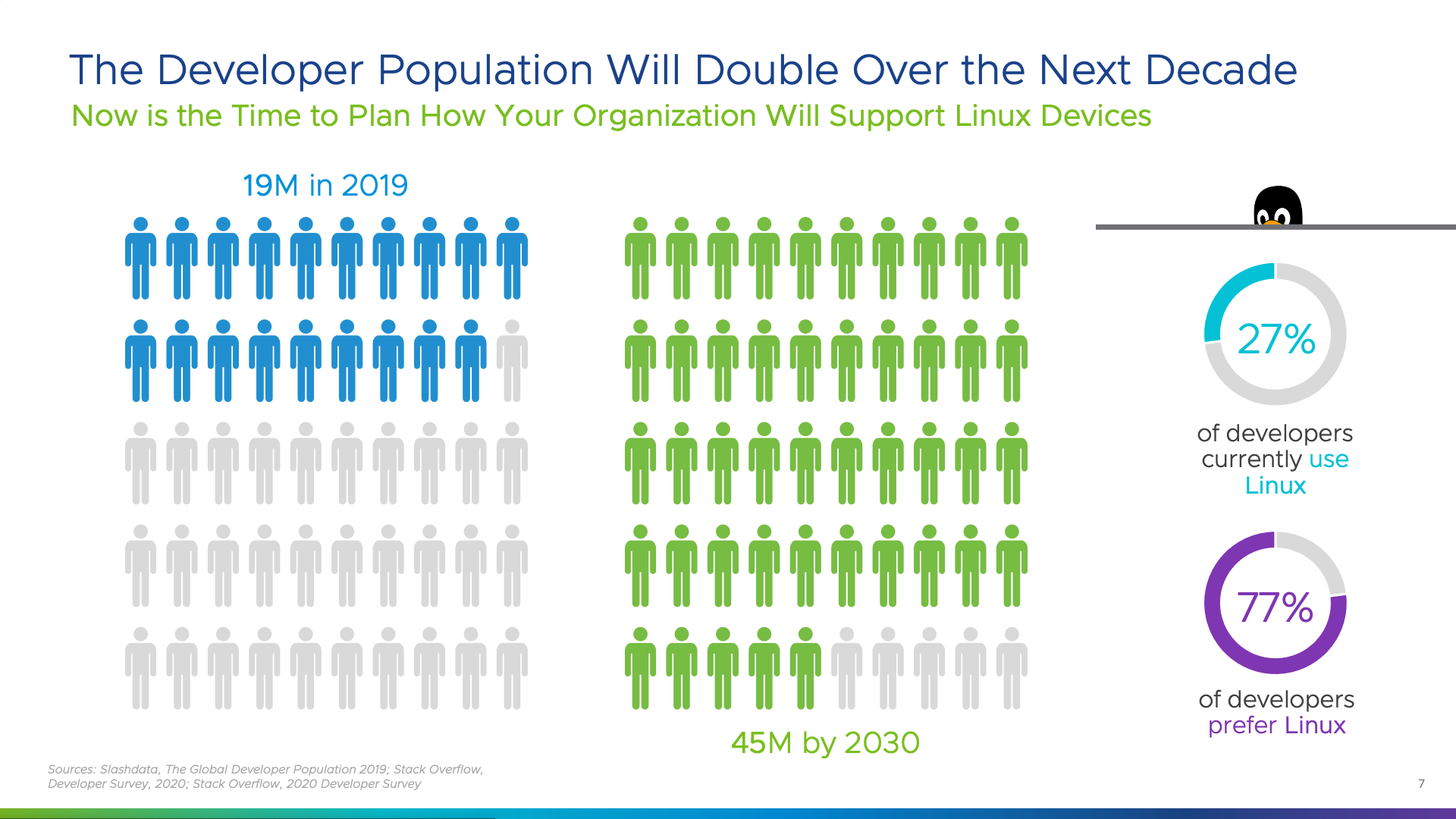 Figure 1: The developer population will double by 2030, and the preferred workstation OS is Linux. Are you ready?

Workspace ONE UEM enables IT to support any Linux device—from developer workstations to unattended IoT endpoints—alongside existing mobile and laptop deployments, from a single console at scale. And because Workspace ONE provides distribution-agnostic support, customers can manage any x86 or ARM-based Linux endpoint, including CentOS, Debian, Fedora, Linux Mint, openSUSE, Raspbian, Red Hat, Ubuntu, and more. Other key features and capabilities include: 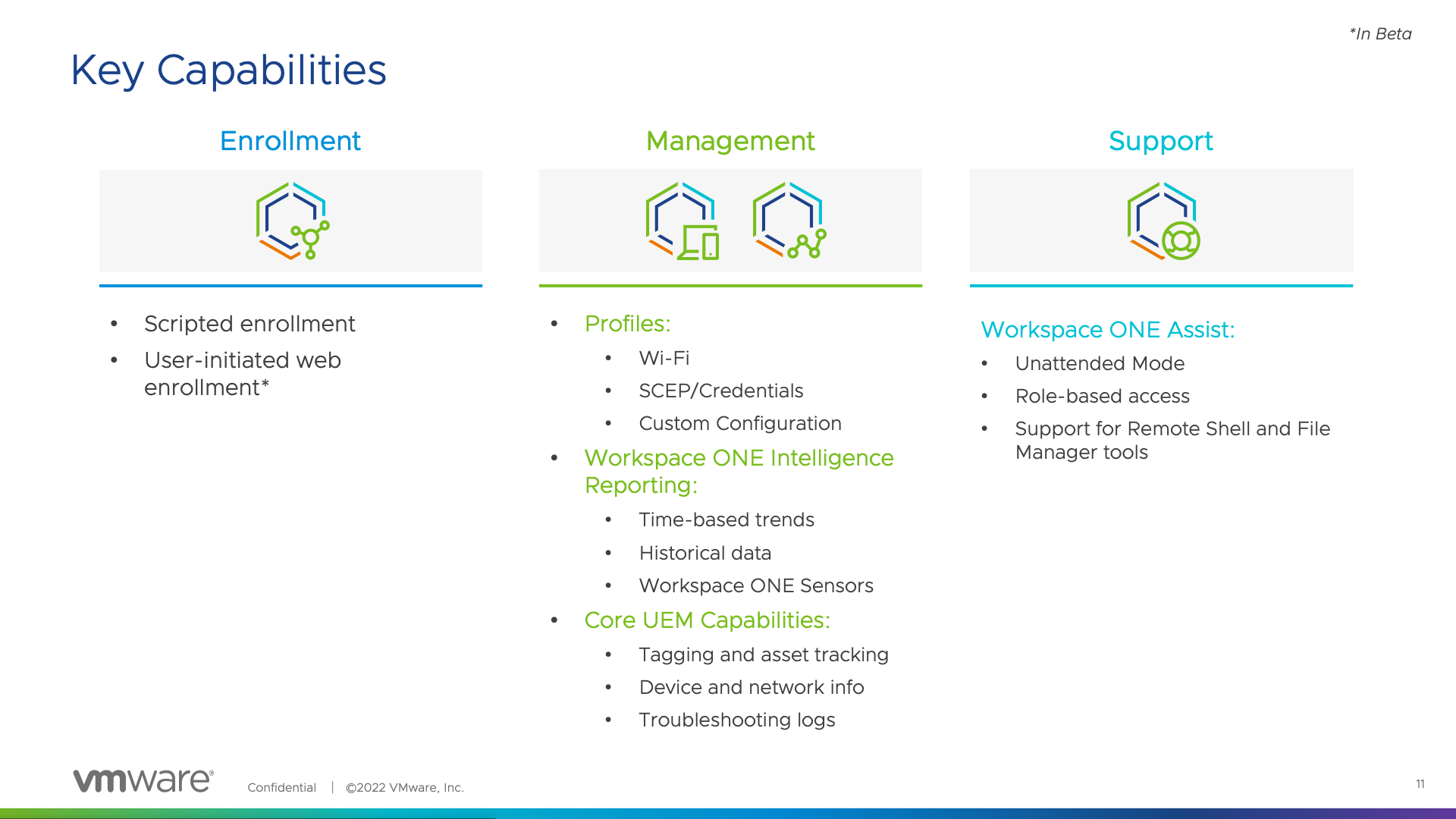 Figure 2: Capabilities of Workspace ONE Linux Management at initial release in November 2021.

But isn’t it impossible to support all the various Linux distros?

As you know, Workspace ONE has touted a single-pane-of-glass management approach since analysts coined the term unified endpoint management (UEM), supporting as many device types, platforms, and use cases feasible. So, how can a single tool manage so many flavors of Linux? This was the primary obstacle the VMware product team aimed to tackle with the initial release of Workspace ONE UEM for Linux.

Any Linux distribution can be enrolled into Workspace ONE UEM so long as the device is x86_64, ARM5, or ARM7-based and is running SystemD or SystemV. There will just be a different Workspace ONE agent installer based on the device architecture and distribution tree: Debian-based, Red Hat-based, or other distros.

This video on VMware Tech Zone walks you through choosing the correct agent installer and the installation steps.

The product team is already enhancing Linux management in the 2206 release by adding the following capabilities. These start to lay the groundwork for future advanced management. Note that Workspace ONE Intelligent Hub for Linux (agent) version 22.06 and Workspace ONE UEM console version 2206 are required for the following features:

Let’s walk through these updates in detail to understand what they mean.

The initial release of Workspace ONE Linux management began with enrollment via command line. Enrollment via web browser was in beta. But now Linux devices can officially be enrolled into Workspace ONE UEM using both methods. In addition, the initial release of UEM for Linux only supported local (basic) UEM users, not directory users. But now web enrollment supports SAML-based authentication. The following video on Tech Zone shows how command line enrollment works:

Browser enrollment means that a user can open Google Chrome or Firefox and initiate UEM device enrollment and Intelligent Hub for Linux will be downloaded and installed, versus installing the Linux Hub manually and using command line to enroll. Because this enrollment method will only create a .dev or .rpm installation package, only Debian and Red Hat-based systems support web enrollment.

Web enrollment for Linux looks very similar to other platforms where the user first enters this URL into a browser: https://{your UEM instance}/DeviceManagement/Enrollment. Then the user is prompted for group ID, username and password, and device ownership type. The difference is that the user will choose the correct installation package to be generated, based on device platform (AMD 64, ARM 5, or ARM 7) and the distribution (Debian-based or Red Hat-based). 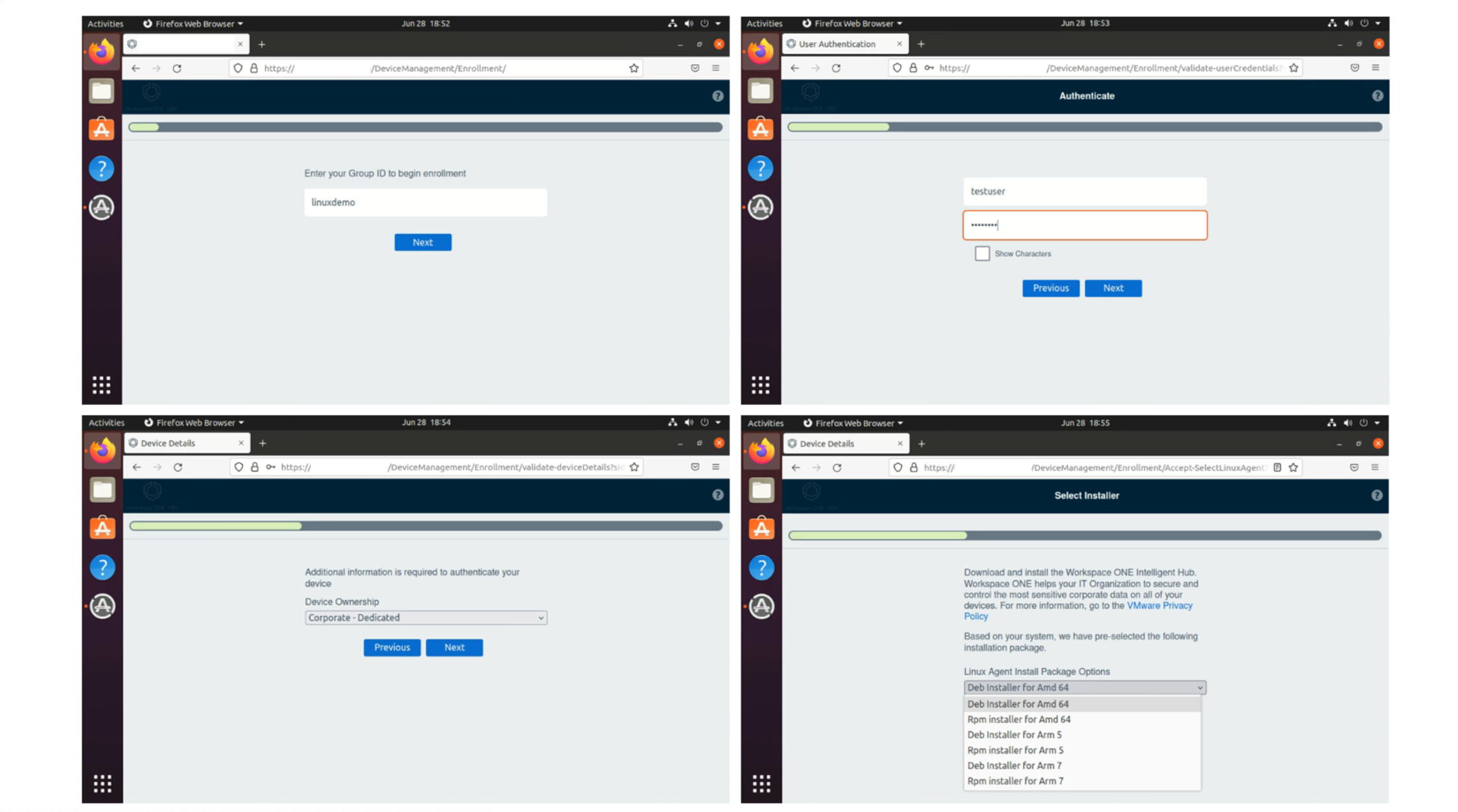 Sometimes referred to as app inventory, the Workspace ONE Linux agent can now collect a list of the installed apps and packages from an enrolled device. You can view the list of apps on a device by navigating to DEVICES > List View then selecting an enrolled device to view the Details View page > Apps tab within the Workspace ONE UEM admin console. 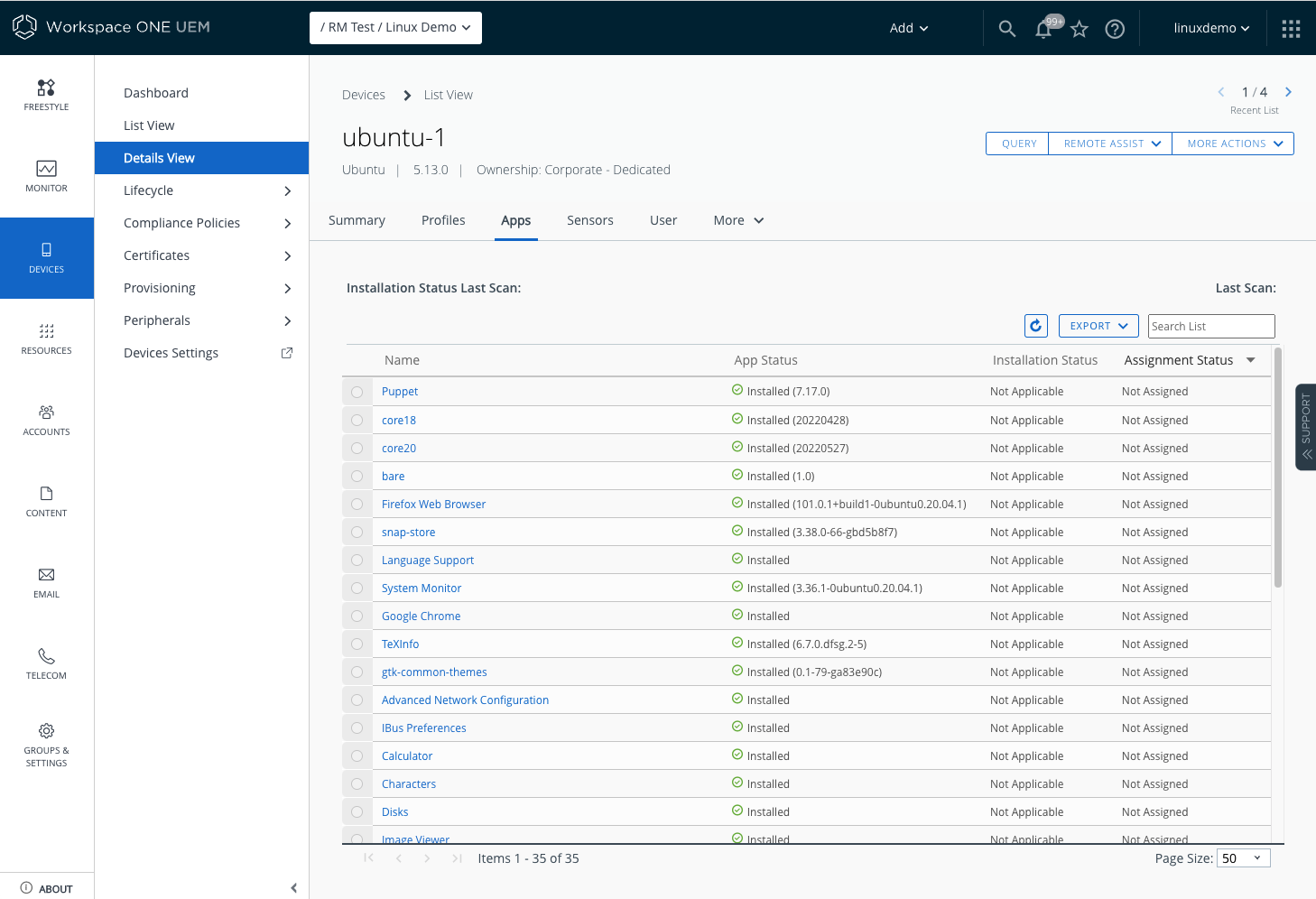 The ability to query the device for the list of installed apps and packages is the first step for future app lifecycle management capabilities within the Workspace ONE UEM admin console.

The Workspace ONE UEM Linux agent now can detect if the device’s drive was encrypted using LUKS (Linux Unified Key Setup) during initial system install or if encryption is disabled. 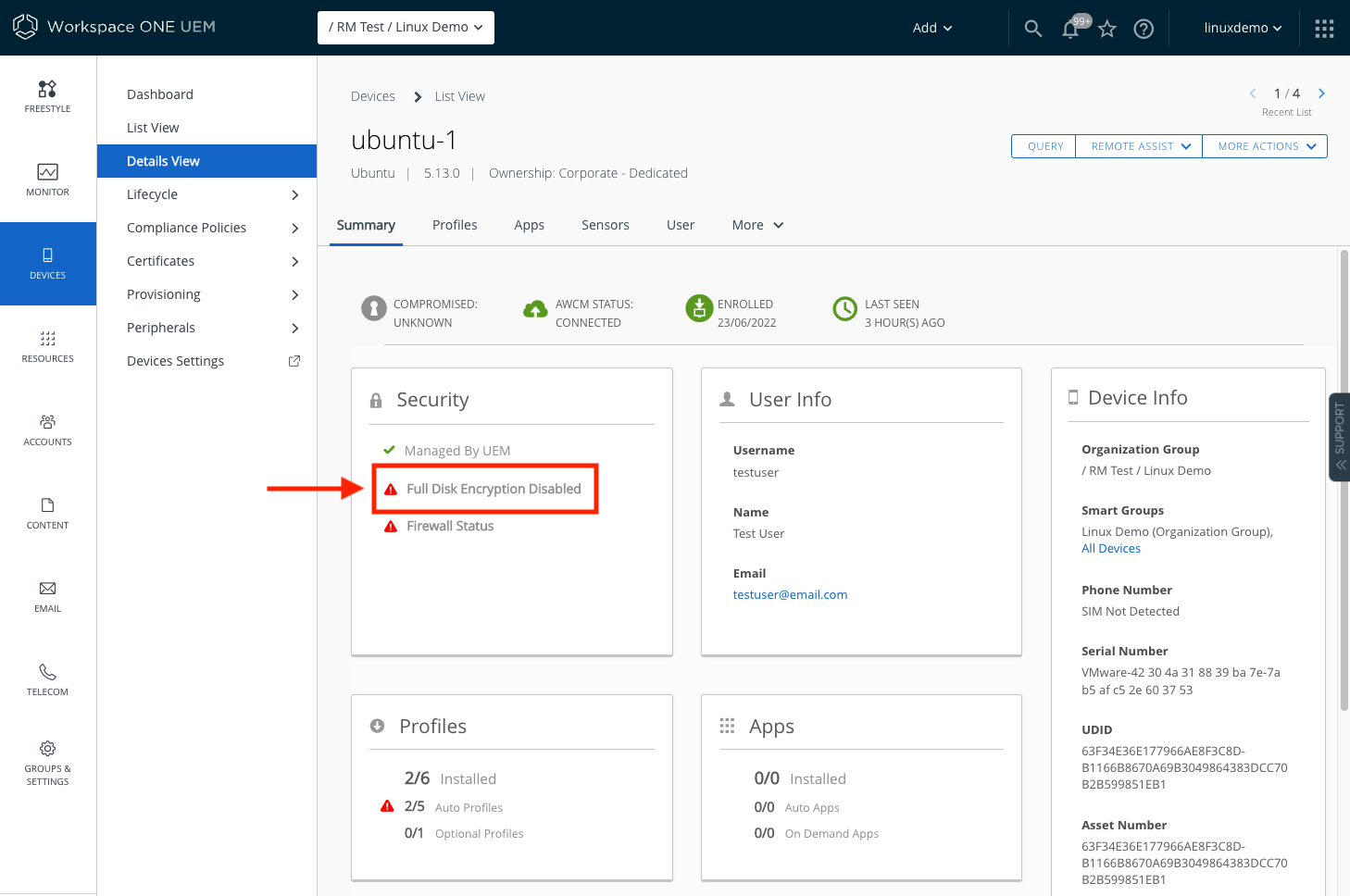 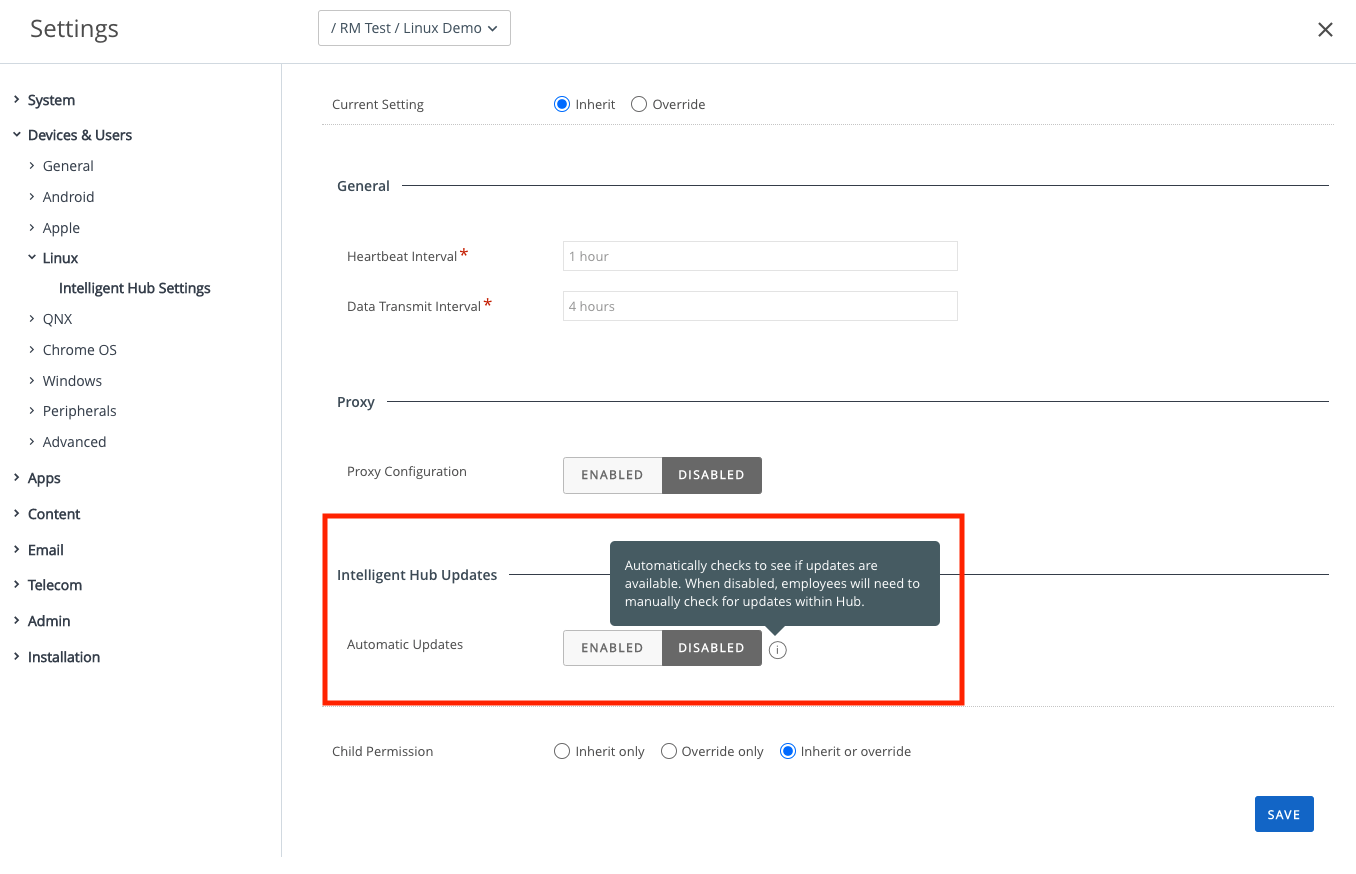 Finally, 2206 adds more options to trigger sensors in the Workspace ONE UEM console.

But first, what are sensors in Workspace ONE UEM? Sensors enable administrators to send bash scrips to the Linux device to collect any additional attributes that are not already included in the UEM console by default. Some examples could be the hostname or processor type of the device. Sensors can be created in the UEM console here: RESOURCES > Sensors. 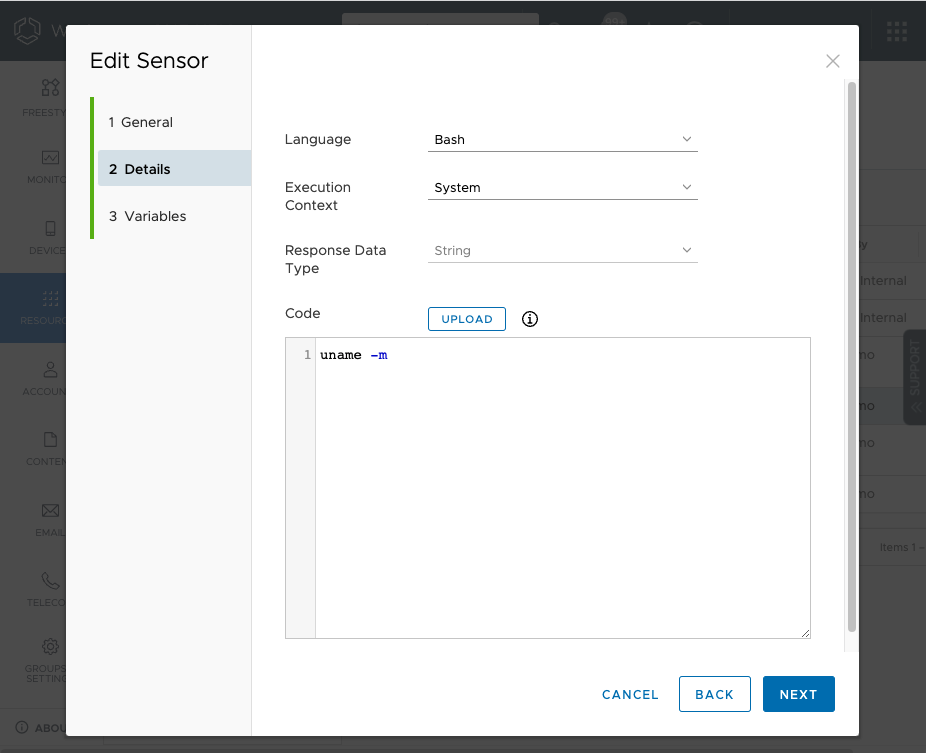 Figure 7: Editing a sensor in the Workspace ONE UEM admin console.

Custom sensor values from an enrolled device can be viewed under the Sensors tab of the Device Details screen in UEM. 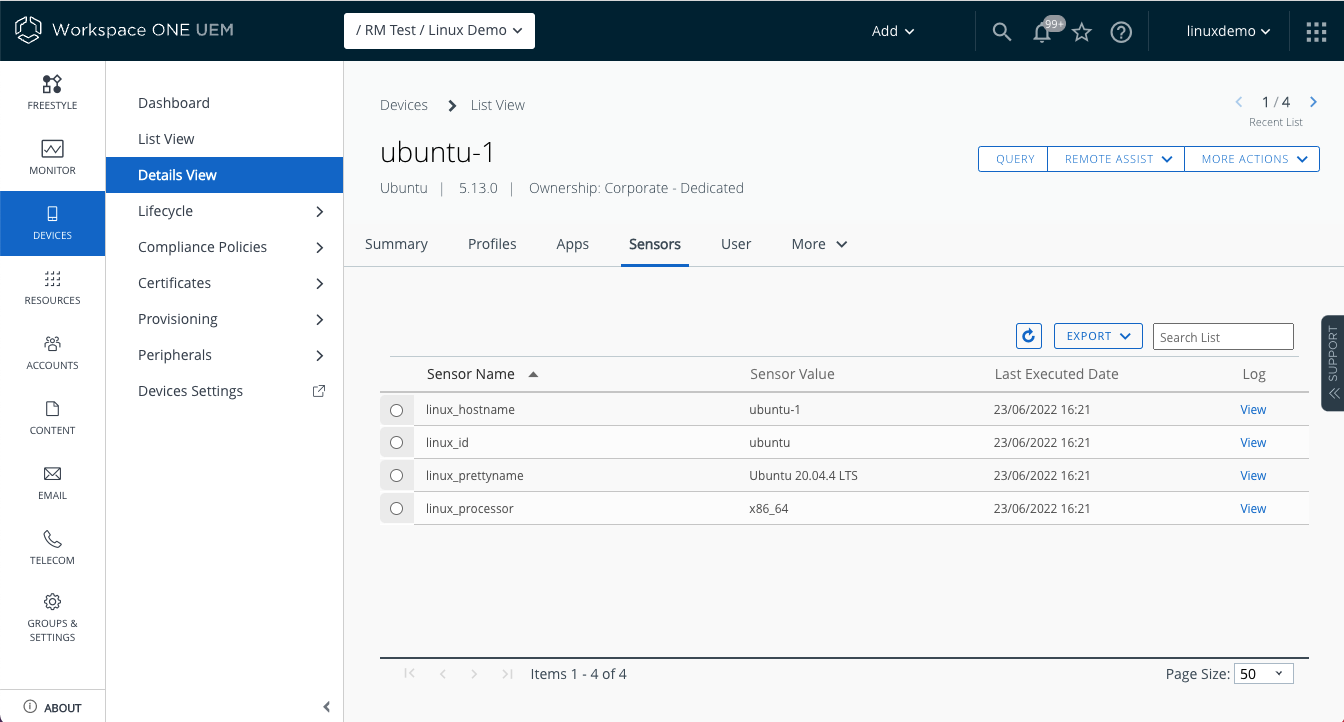 Figure 8: Viewing sensor values for a Linux device in the Workspace ONE UEM admin console.

So now, what do we mean by triggers for sensors?  When assigning sensors to devices, various events can be used to trigger a query of the device for an updated sensor value. The following options are now available: 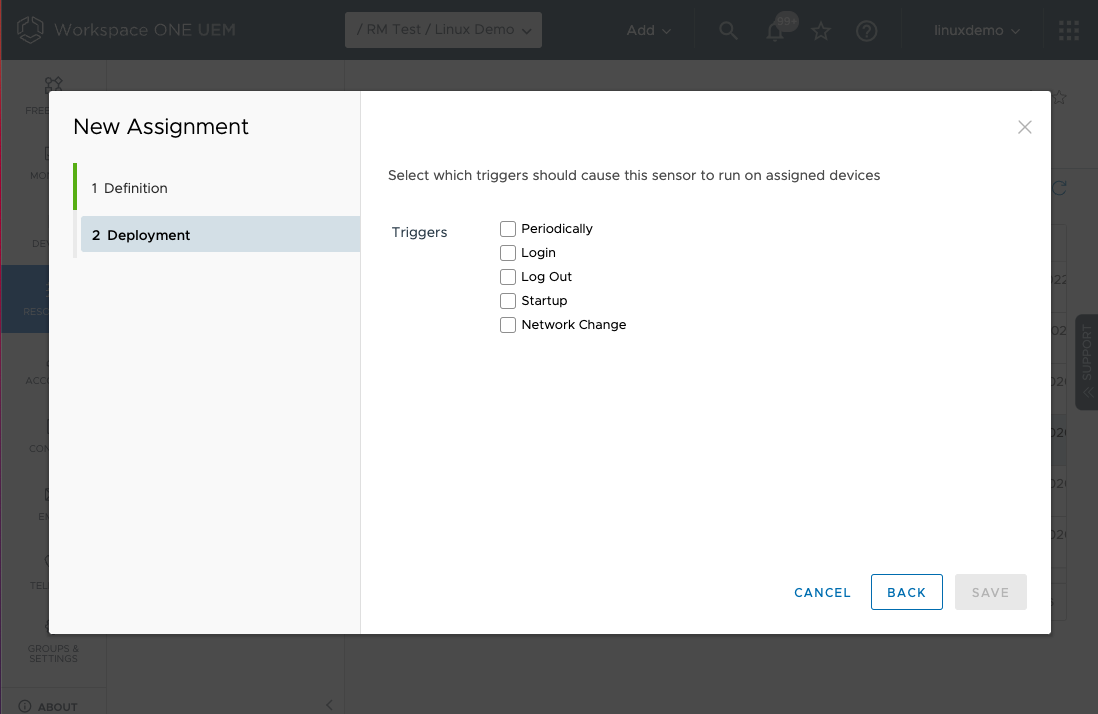 This is one of the first steps to providing advanced automation options for Linux management in the future.

So, when choosing a Linux management tool, consider that you likely have multiple distributions out there and ideally would have a distro-agnostic management platform that can provide remote configuration and support to a variety of Linux endpoints. In addition, the management tool would not only provide a method to push scripts to devices but would also have built-in configuration options, so the administrator doesn’t always have to write a script to accomplish a task. The Workspace ONE Linux team plans to continue evolving the Linux solution to simplify management and work towards providing automations for workflows, compliance, and remediation.

Check out these additional Workspace ONE Linux Management resources to learn more:

Staff Architect, Workspace ONE Technical Marketing, End User Computing, VMware. Christina has a background leading Pre-Sales System Engineering teams at VMware, including End User Computing and Internet of Things business units, and also at Google Cloud. Prior to Workspace ONE Technical Marketing, she led Technical Marketing, demo lab management and PoC/Beta Testing Programs for New Product Introduction within the VMware Edge and IoT business. Christina has a passion for communicating highly technical concepts in a format that anyone can understand. She holds a Bachelors in Management Information Systems from The University of Georgia and an MBA from Kennesaw State University.