This chapter is one of a series that make up the VMware Workspace ONE and VMware Horizon Reference Architecture, a framework that provides guidance on the architecture, design considerations, and deployment of Workspace ONE and Horizon solutions. This chapter provides information about design and deployment of VMware Horizon on a stretched VMware vSAN Cluster.

One infrastructure option for providing site resilience is to use a stretched cluster that extends a VMware vSAN™ cluster across the two data sites.

This architecture is achievable with data centers that are near each other, such as in a metro or campus network environment with low network latency between sites. A stretched cluster provides both the data replication required and the high-availability capabilities to recover the server components, desktops, and RDSH servers.

This main use case for Horizon on a stretched VSAN cluster is full clone or persistent desktops where there is data, apps or config contained in the desktops that needs to be preserved and presented at the alternative site, and that data cannot be easily extracted from the desktops.

A stretched vSAN can be used with other clone types, including instant clones, the best way to handle non-persistent clones is to deploy separate pods per site. The separate pods can be joined together using either Cloud Pod Architecture (CPA) or the Universal Broker to provide a consistent experience to users.

With a non-persistent use case, data should be extracted from the desktop and replicated between sites. This then allows you to have an equivalent desktop available in a second site and have that data available there. This is relatively low cost in terms of replication, allows a fairly high RTO and gives the most robust design for site resilience.

With some persistent desktops it might not be as easy to extract the data. This is especially true with full clones, where you are essentially giving each user a full desktop and they could be creating data and config within it. In these cases, you may have to replicate either the full VM or the disk portions where you believe any user data (that you care about) may reside. The replication of a stretched vSAN cluster can help address the need to replicate the VMs from site to site. The RTO will not be as good as separate pods with CPA, as the Connection Servers will need to restart in the second site and the desktops will also need to restart

You should view the vSAN stretched cluster with Horizon as a disaster avoidance model and not true disaster recovery.

You can run Horizon on a stretched vSAN cluster but the considerations are:

Regardless of the storage configuration, one key design is that Connection Servers from the same pod should not be active in more than one location at a time, which would stretch that pod over two locations. If you are using a stretched cluster and storage, use vSphere rules to pin the Connection Server to one location (site). If they failover, all the Connections servers should move as one, to avoid any stretching of the Horizon pod itself.

Requirement: The management servers are pinned to a specific data center but can be failed over to a second data center in the event of an outage.

Although the Windows component of the user service could be composed of full clones, linked clones, instant clones, or RDSH-published applications, this reference architecture shows full-clone desktop VMs. This strategy addresses existing Horizon implementations that use full-clone persistent desktops. Use cases involving floating desktop pools or RDSH-published applications are better served by adopting the active/active or active/passive use cases previously outlined. These use separate Horizon pods per site with Cloud Pod Architecture for global entitlements.

Blueprint for the Active-Passive Service 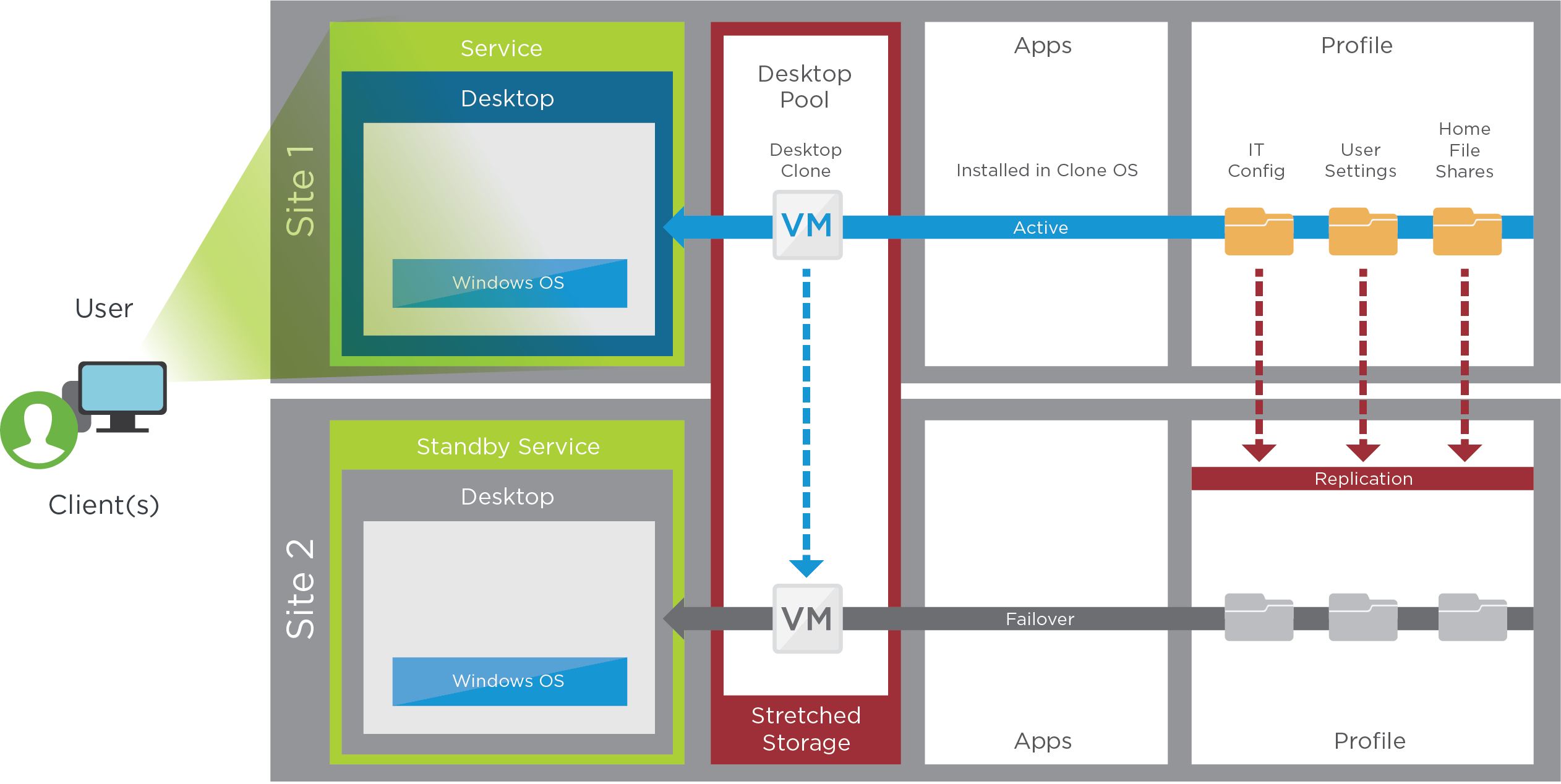 This architecture relies on a single Horizon pod with all required services always running at a specific site and never stretched between geographical locations. Only desktop workloads can run actively in both sites. The Connection Servers and other server components can fail over to Site 2 as a whole unit in the event of an outage of Site 1. This architecture relies on vSAN stretched cluster technology.

In the validation of this design, a vSAN storage environment was deployed as a vSAN stretched cluster to provide high availability and business continuity for the virtual desktops in a metro cluster deployment. The vSAN stretched cluster also achieves the high availability and business continuity required for the management server VMs.

To protect against a single-site failure in a metro or campus network environment with low network latency between sites, a stretched cluster can synchronously replicate data between the two sites, with a short RTO time and no loss of data.

vSAN does support active/active data sites with desktops and RDSH VMs active in both sites. Although these virtual desktops and Horizon published applications can operate in active/active mode, the supporting management machines, and especially the Connection Servers, must all run within the one data center at a given time. To achieve this, the management servers should all be pinned to the same site at all times. Horizon management services are deployed in an active/passive mode on a vSAN stretched cluster, failing over to the secondary site in the event of a site failure.

A vSAN stretched cluster is organized into three fault domains, referred to as preferred, secondary, and witness. Each fault domain denotes a separate, geographically dispersed site.

Horizon Pod and Block in a vSAN Stretched Cluster

In the validation of this design, a single vSAN stretched cluster was used for both the management block and the desktop block.

One VMware vCenter Server® was deployed for the management servers and the desktop resources. 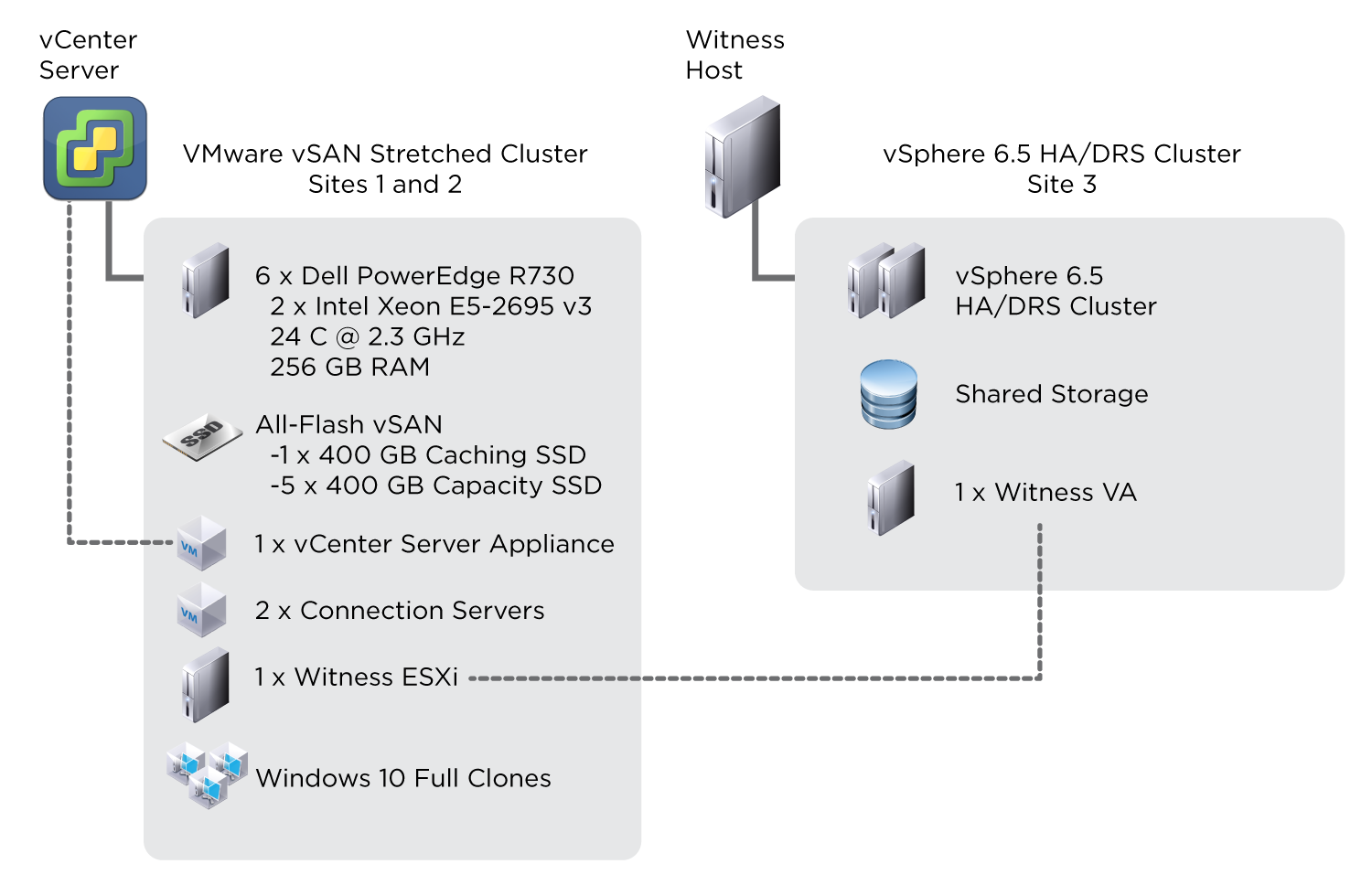 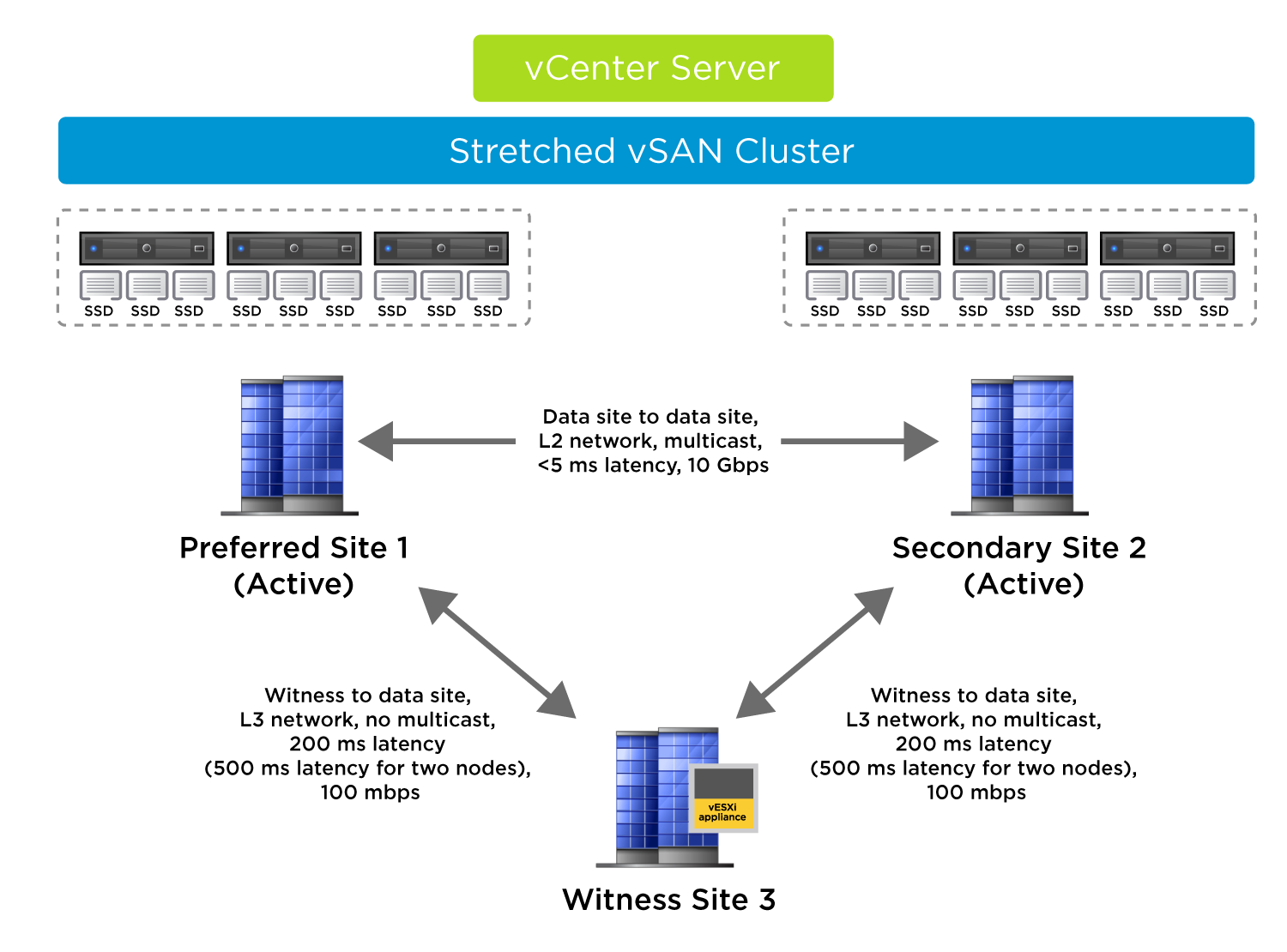 A critical requirement for a vSAN stretched cluster is the amount of latency between sites. Latency between data sites should not exceed 5 ms RTT (2.5 ms each way).

Maximum latency between data sites and the witness site depends on the number of objects in the vSAN cluster. In general, latency between a data site and witness site can be a maximum of 200 ms RTT (100 ms each way), for up to a 10+10+1 vSAN configuration (preferred + secondary + witness nodes). For configurations greater than 10+10+1, VMware requires a latency of less than or equal to 100 ms (50 ms each way).

Bandwidth requirements between data sites and the witness site depends on the number of components in the vSAN cluster.

For more detailed information on how to calculate the required bandwidth for vSAN stretched cluster, see the vSAN Bandwidth Calculation page.

A single instance of VMware vSphere® Distributed Switch™ was created with two 10-Gb interfaces in a team.

Quality of service is enforced with network I/O control (NIOC) on the distributed virtual switch, guaranteeing a share of bandwidth for each type of traffic. 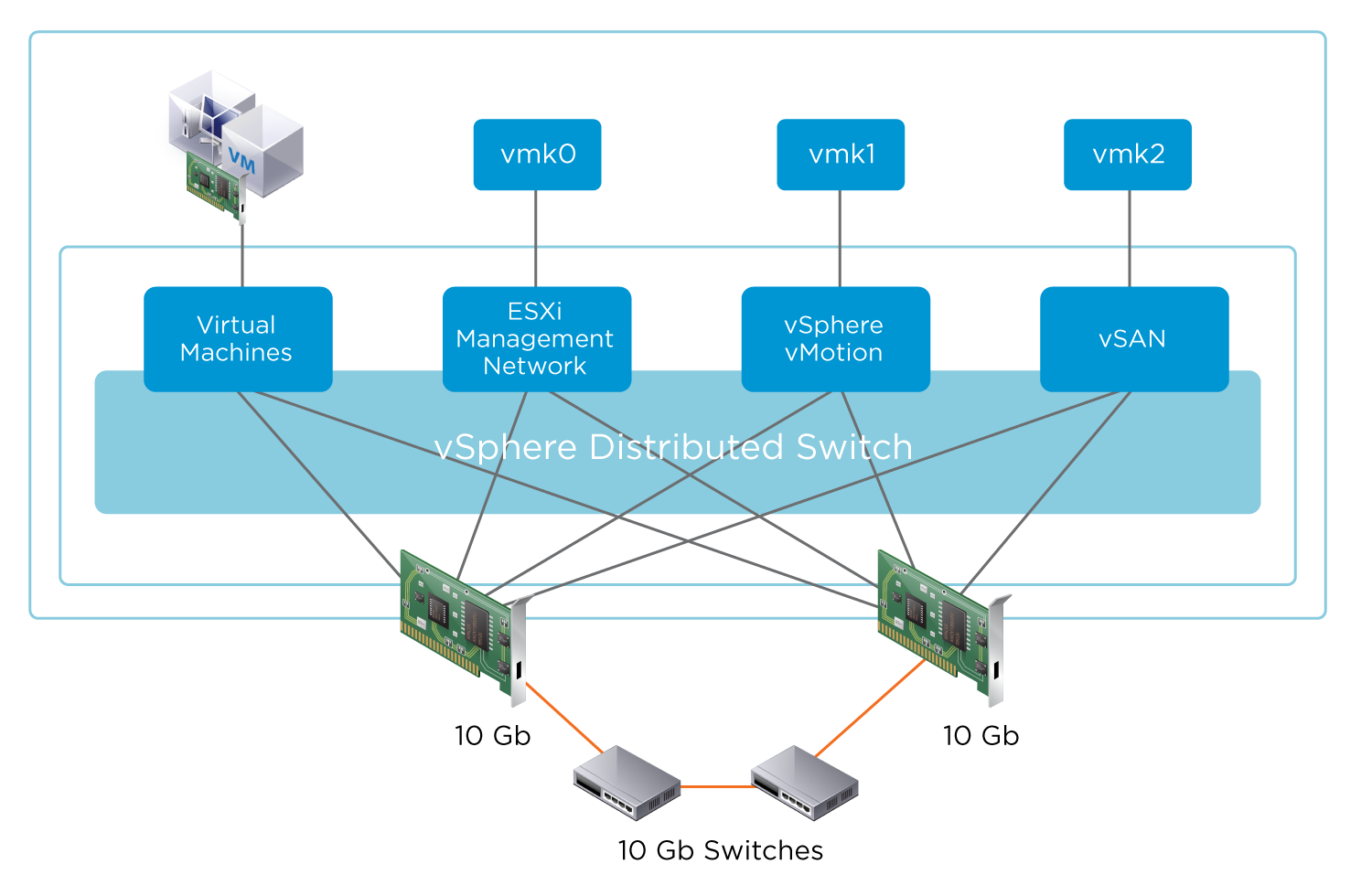 In this example, the virtual witness is connected over L3 and static routes. vSAN data sites 1 and 2 are connected over a stretched L2 network for the management network, vSAN network, vMotion network, and VM network. 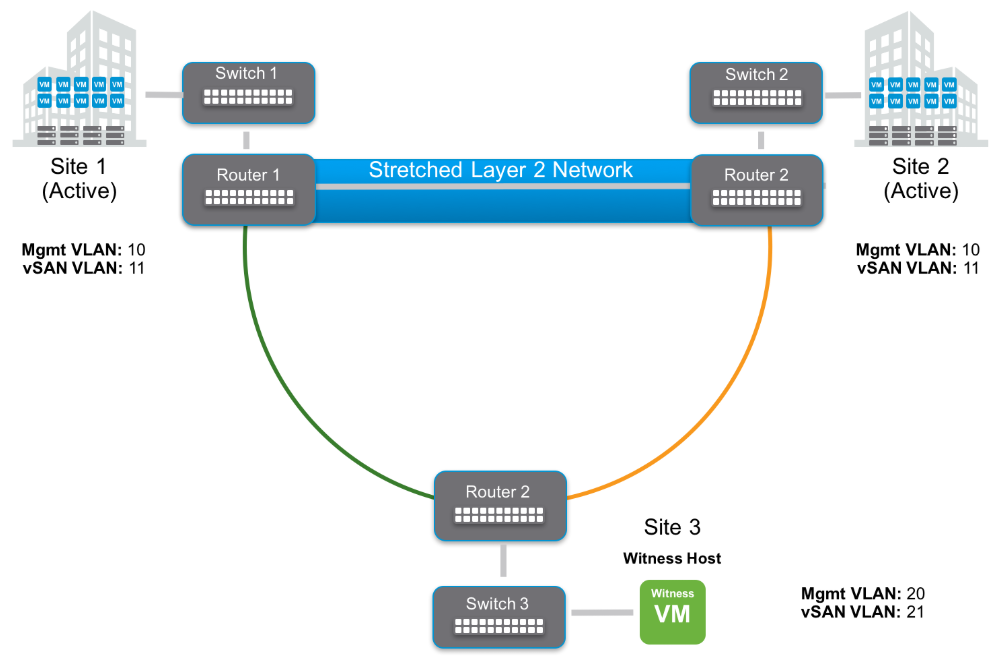 Static routes are added using esxcfg-route–a command that you run on the ESXi hosts. Run this command on all ESXi hosts in the cluster, both in the data sites and on the witness host.

Configure the physical network switches to have IP routing enabled between the vSAN network VLANs on the data sites and the witness site, in this example VLANs 11 and 21. Once requests arrive for the remote host (either witness-to-data or data-to-witness), the switch will route the packet appropriately.

This section provides specifications for designing the infrastructure of the active/passive service using a vSAN stretched cluster, including settings for vSAN, vSphere, distributed switches, and storage.

The vSphere HA settings are summarized in the following table.

Settings for VMware vSphere® Distributed Resource Scheduler™ are summarized in the following table.

For the vSAN configuration of 3+3+1, the following vSAN storage policies were used:

This section covers the high-level steps required to build out the active/passive service (using a vSAN stretched cluster), which can be seen from a blueprint perspective in the following figure.

The following table outlines the steps required for creating a vSAN stretched cluster.

The following table outlines the steps for creating the virtual desktops and published applications to be provided by a vSAN stretched cluster.

Note: With regards to the environmental infrastructure design, including Active Directory, distributed file systems, load balancing, and DHCP, you can use the same design as is used for the multi-site active/active and active/passive use cases, as described in Environment Infrastructure Design.

This section details the impact to both users and services during failure and the behavior after failover for all the services.

Users were logged in to full-clone virtual desktops when the failure occurred.

The following table lists the preliminary tests and checks to be performed.

The following list of tests includes descriptions of occurrences during a vSAN stretched cluster active/passive service failover, the recovery steps required, and the test results.

Now that you have come to the end of this chapter, you can return to the landing page and search or scroll to select your next chapter in one of the following sections: