This operational tutorial provides best practices for anyone deploying App Volumes 2.x to deliver applications such as Microsoft Project or Microsoft Visio 2016 to their end users. Applications like these can interact with suites such as Microsoft Office, and require specific considerations during AppStack provisioning. This tutorial covers some best practices to create a seamless experience for your end-users with App Volumes.

This operational tutorial is intended for IT professionals and App Volumes administrators of existing production environments. Both current and new administrators can benefit from using this tutorial. Knowledge of VMware vSphere®, VMware vCenter Server®, Microsoft SQL Server, and View in VMware Horizon® 7 or VMware Horizon 6 is helpful.

The process of capturing Microsoft Project or Visio is not much different from other applications, but before starting this, it is highly recommended to go through the prerequisites mentioned below.

Make sure you use the correct media for the Microsoft Project or Visio installation in combination with VMware App Volumes and Horizon.

You are ready to proceed to the next section to capture Microsoft Project. The same technique and steps used below can be used for Microsoft Visio.

This section provides an example of how to capture Microsoft Project.

Note: The same technique and steps used below can be used for Microsoft Visio.

To test the Microsoft Project AppStack that you just created:

Now your Microsoft Project AppStack is ready and can be assigned to your end-users.

This section covers some troubleshooting tips.

Issue: The following error message appears during provisioning of the AppStack:

The system cannot open the device or file specified.

If you run into the error message “The system cannot open the device or file specified,” during provisioning of Microsoft Project, pressing the Cancel button shows another error message. 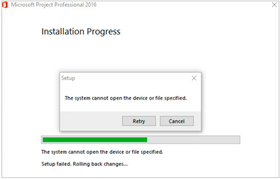 Issue: When starting Microsoft Project, the application shows the configuration Progress and errors out with the following message:

The system cannot open the device or file specified.

The provisioning process of Microsoft Project might have gone successfully, but after assigning the Microsoft Project AppStack and starting the application, the user is getting one of the following error messages, usually when attempting to auto-activate the license using KMS discovery through DNS: 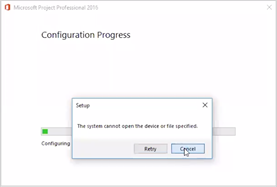 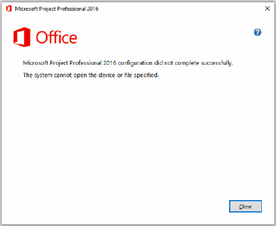 About the Author and Contributors

This operational tutorial was written by:

Additional contributors to this tutorial include: