The new release of VMware Horizon 8 (2006) contains a variety of new features and enhancements to choose from. You can listen to our SME describe these changes below:

Here are some of the most notable new enhancements and updates to the platform:

You will find the following new features and enhancements in the VMware Horizon Console:

A number of general updates are included in the new Horizon Console, including the ability to set a display name for global entitlements, an improved grid where more detailed data can be displayed in the easy-to-read layout.

This release includes a restriction against connecting with older Horizon Clients:

In Global Settings, you can configure multiple criteria for what to block, and set up a customized warning message to remind users to upgrade. Only the 8.x (2006) client and later versions can support this warning message (it is not supported on thin clients).

You can now see many more details on ports, which is helpful when selecting a network during the pool creation process. This includes details about the individual network such as binding, network name, total ports, and available ports, as well as incompatible network types.

You can now send direct in-product feedback to the product teams in 11 languages. The static format is always available (see the bubble in the upper right corner of your console):

The popup format is also available, based on logins and duration. You also have the ability to opt out.

You can now set it up so that only privileged workstations can connect to a pool. To do this, create an entitlement that restricts both the user and the desktop, so that the specific user must use a specific desktop.

You now have support for Red Hat Enterprise Linux 7.8, as well as multi-session support on Red Hat 7.8, 8.1, and Ubuntu 1804. You can set it up by installing a Linux agent with --multiple-session and see a demonstration at https://techzone.vmware.com/vmware?share=video2743.

This release gives you a number of improvements to full-screen video and memory utilization in Blast Codec, which is now enabled by default. You can also enjoy support for HEVC 4:4:4 Codec with Intel CPUs, which is the 10th generation of Intel Ice Lake. This is Windows VMs only with the 2006 client, and it is on by default if the hardware exists. In addition, there is support for up to two 8K monitors, and an improvement to how the client topology is sent.

This release includes new optimizations in real-time audio and video, including H.265 encode and decode. These optimizations improve the user experience for webcam usage and video conferencing. Support includes Zoom, Microsoft Teams, and Skype for Business, as well as Windows Tablet.

Each type of Horizon client has new enhancements and updates, including the new Client Restriction Messages mentioned earlier. You will see this option in the UI of all Horizon Clients.

This popular feature is optimized for video and desktop sharing with Microsoft Teams on Horizon 2006. A specific set of configurations are supported, including Horizon 2006 Server, Horizon 2006 Windows Client, and that has Teams for VDI installed with the per machine option enabled. Note that this is not supported on RDS desktop pools or application pools.

In addition to the Client Restriction Message, the Horizon Linux Client also now supports Ubuntu 20.04 LTS, full IPv6, custom display resolutions,  and an updated SDK that allows you to customize the Linux client and get more brokering and remote sessions data.

In addition to the Client Restriction Message, the Horizon Mac Client now has USB auto-connect for RDSH apps.

In addition to the Client Restriction Message, the Horizon Android Client also supports VMware Integrated Printing, as well as the ability to pass the Android device ID to OPSWAT.

In addition to the Client Restriction Message, the Horizon HTML5 Client now supports Edge Chromium, as well as the option to save the monitor layout on Windows, MacOS, and ChromeOS desktop endpoints.

The new release of VMware App Volumes includes a variety of new enhancements and updates, including the new naming convention: 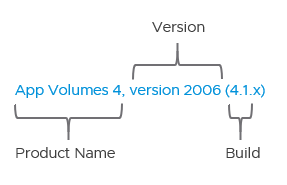 Improvements in this release include performance improvements to speed up user logins, diverse application support, and more. Here’s a summary of some of the most notable improvements:

App Volumes Manager is upgraded to now communicate with Domain Controllers configured for LDAP Channel Binding, in keeping with the March 2020 ADV190023 | Microsoft Guidance for Enabling LDAP Channel Binding and LDAP Signing. App Volume Manager and App Volumes Agent 2006 4.1 are required, and Channel binding support is enabled by default. Note that the LDAP AVM setting works only if AD LAPServerIntegrity is set to 0.

You can now limit the delivery of application packages to specific computers by appending the computer’s name to set application assignments. This prevents packages from attaching when users login to an unsupported desktop pool. Note that this is not available when assigning directly to a computer object.

Support was added for:

Rolling upgrades are now supported, meaning you can upgrade from one version of App Volumes to the next with no downtime. You can also update one sever at a time while others continue running. For more information, see App Volumes Installation Guide.

This release gives you an early-access tech preview of new packaging options and wider format support. App Volumes Manager enables packagers to use the same lifecycle and assignment marker features with different package formats, side-by-side. The App Volumes agent can leverage Microsoft’s native app to attach functions alongside its own App Volumes virtualization format. See the App Volumes Packaging Utility fling, which helps package applications and supplements the VHD with the required metadata before importing.

A number of new features and enhancements come with the latest release of VMware Dynamic Environment Manager.

New editions are now available: Standard and Enterprise. The Standard edition is available to you if you have new or existing Horizon Standard and Advanced deployments. If you have a Horizon 7.x deployment with current SNS, you will receive DEM Standard with Horizon 8. To learn how to migrate from legacy solutions to modern solutions in detail, see Modernizing VDI for a New Horizon. https://techzone.vmware.com/resource/modernizing-vdi-new-horizon , including scripts to help you automate the process of migration.

You can use Dynamic Environment Manager to manage user and computer-based ADMX policies without the need for group policy options. You have been able to manage user-based templates in the past, but now computer-based templates are available as well. This streamlines your job by reducing the number of consoles to manage. You have granular control of policy application. Find out more about the benefits and use of this feature: