The latest release of Horizon 8 (2012) provides a sharp new console and performance, reliability, and scalability enhancements, including improvements to the general platform, remote experience, Instant Clones, Group Policies, Horizon Agents, and Horizon Clients. Note that Linked Clones and Persistent Disks have been deprecated, as well as Adobe Flash. A new asset has made the scene, “Modernizing VDI for a New Horizon,” which provides detailed migration guidance for upgrading to Horizon 8 (2012).

Watch this video to hear the details from Chris Halstead, EUC Staff Architect at VMware.

General platform updates include new endpoints for REST APIs, improvements to Helpdesk and Events UI performance, separation of View-API and Horizon Console session timeouts, ability to use public IPs Instead of private addresses, and much more.

To get your hands on them, go to the FQDN of the Horizon server (https://<FQDN>/rest/swagger-ui.html) to explore and test the new API endpoints. 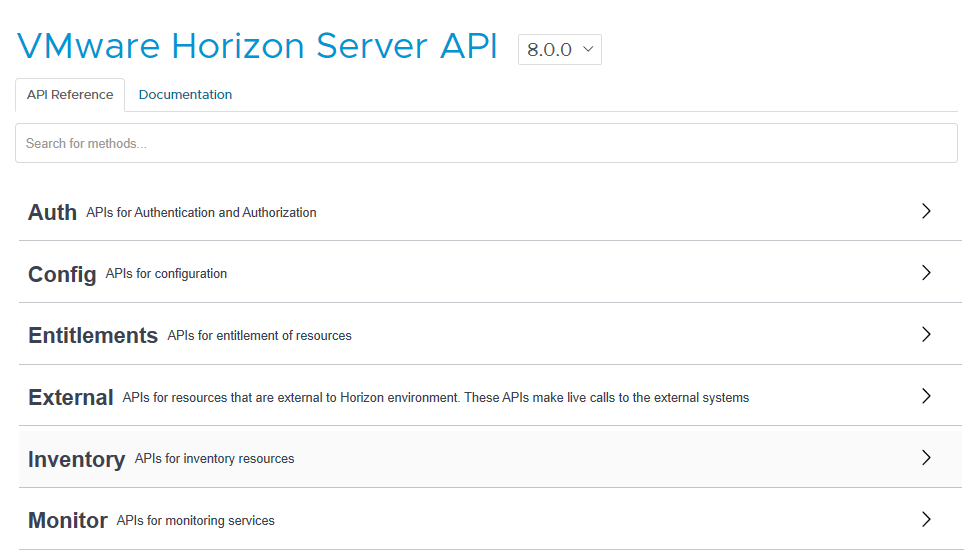 For a detailed introduction to the API, see Using the VMware Horizon Server REST API.

This release brings new SQL queries and a new API called NewEventSummaryView, which you can use to return event data faster. The Events UI and Helpdesk screens are more responsive because only the data you need is returned, instead of returning everything. For example, a query that used to take 2.5 hours to return event items now takes 2 seconds to return essentially the same data. A huge difference!

Ability to set the VDI idle disconnect over 10 hours

Ability to use Public IP Instead of Private Address

In this release, you can now send the Public IP address of the end user instead of sending the private address to the agent to indicate the location of the end user. Not only is this more reliable, but it also results in improved end-user location data at the agent, which is used for tracking, monitoring, or determining geographic location.

This is another enhancement that was ported over from Horizon 7.13.

With this release, you now have cross-platform support for scripts. PowerCLI for Horizon View has now been ported from .Net to .NetCore, giving you cross-platform support for scripts. In the past, you had to run your scripts in Windows. Now you have the option of running your scripts in Windows, macOS, or Linux operating systems. PowerShell 6.0 and above are supported.

Previous announcements have warned that legacy features are being removed from Horizon. So it won’t be news to you that Horizon 8.1 (aka Horizon 8 2012) no longer supports Linked Clones, Composer, or Persistent Disks at all.

Note that you can explore and test Instant Clones in earlier versions from Horizon 7.13 and develop familiarity with them. If you try to upgrade to Horizon 8 (2012) with an environment that contains Composer, Persistent Disks, or Linked Clone Pools, you will see the following message and the upgrade will fail. 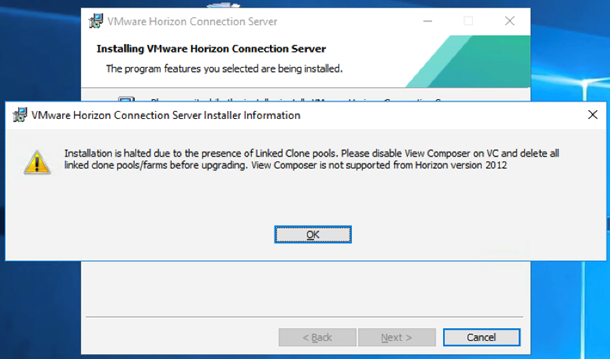 Modernizing VDI for a New Horizon

We’ve provided a blueprint to guide you through the migration process. Included is migration guidance from Persona Management, Persistent Disks, and Linked Clones to a more modern desktop.

For this migration guidance, see Modernizing VDI for a New Horizon.

End of Life for Adobe Flash

Also mentioned previously, Adobe Flash is being end-of-life’d as of December 31st. You can avoid risk by migrating to Horizon 7.13 or later. You must be on Horizon 7.10 to have parity between HTML console and Flex.

The new release now supports the Remote Power Policy for dedicated instant clones. Similar to Linked Clones, you can indicate whether to keep your Instant Clones always powered on, to suspend them, or to power them off.

Support for the VMware Update Manager includes parity issue with linked clones, and it does not support IC without a parent, so it won’t work with vTPM. Instead, you can put the server into maintenance mode manually.

In the new release, the Horizon Console sports a sharp, new look with improved performance and scalability. Clarity Data grids have been introduced globally and migrated off of Angular JavaScript to native Angular. 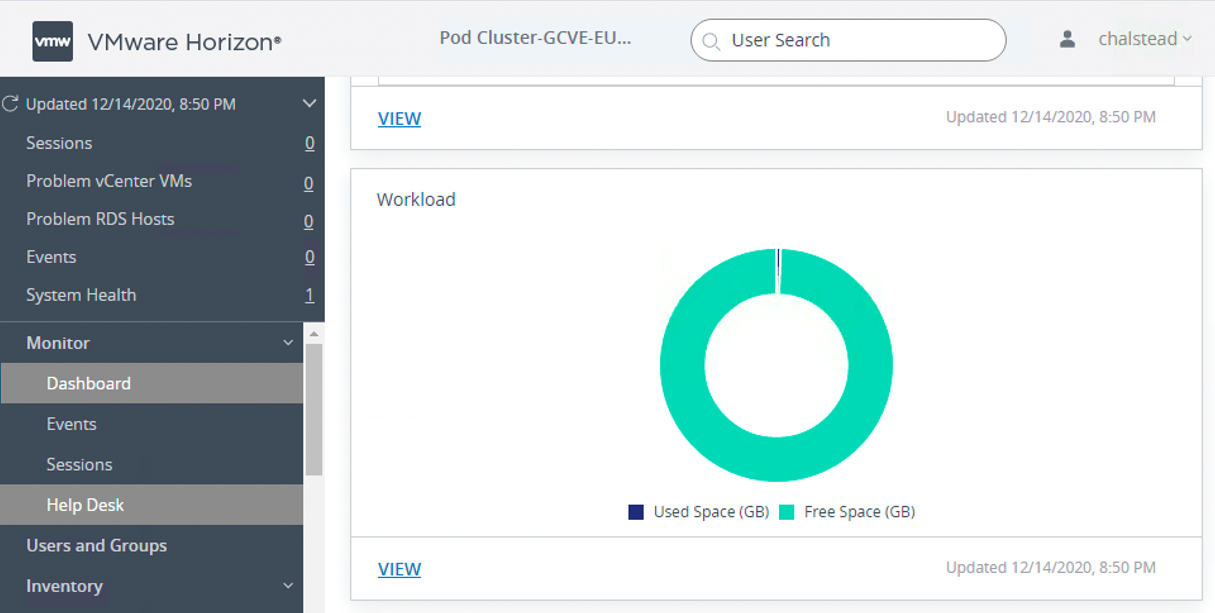 You can now deactivate access to application pools, which has long been possible for desktop pools in the past. You can deactivate a pool quickly for maintenance using the new enable/disable option, and just as easily activate it again when ready. This option is supported for both VM Hosted Applications and RDSH.

Ability to set a Machine Alias

You can now set a machine alias for dedicated pools, a per-user custom desktop name for assigned users of dedicated desktops and global entitlements. For example, you can name a device “Chris’ Machine” instead of using its full name.

This can be used for dedicated pools and with Cloud Pod desktop Global Entitlements.

You now have the ability to download log bundles directly from the Horizon Console, including Connection Servers, Desktop Agents, and RDS Agents. This enables centralizing, automating, and collecting logs, which used to be a manual, sometimes daunting process performed by the Administrator.

This release offers a number of general updates, including support per monitor DPI sync. Sync DPI in live session, which is critical when dynamically closing or plugging in monitors, or changing selective monitors during sessions. While in a live session, just click Use Full Resolution for Retina Display, and it dynamically updates the respective DPI. 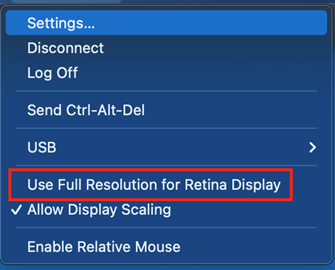 This release supports mis-matched versions of Client and Agent in nested mode, which is especially important in environments such as healthcare that use nested environments. In the past, it was important to keep the agent and client versions matched to do nested hops, such as connecting to desktop, and from the desktop, connecting to a publication application.

The Linux Agent has improvements to this this release, including support for:

Enhancements to the remote experience now include:

This release brings a multitude of new and enhanced group policy settings include:

The new release brings a variety of new features and enhancements to the entire Horizon Client family, including the ability to connect to all ports automatically, support for USB Microscopes redirection, custom USB forwarding, the ability to share time zone data from the client, and much more.

This release provides Windows 10 2009 support, as well as improvements that include the ability to:

As well as improvements to device certificate authentication for the Linux client, the following options are also now supported: