This feature empowers our Linux end users by giving them a high-quality audio and video calling experience when they use Microsoft Teams on a Horizon VDI desktop. 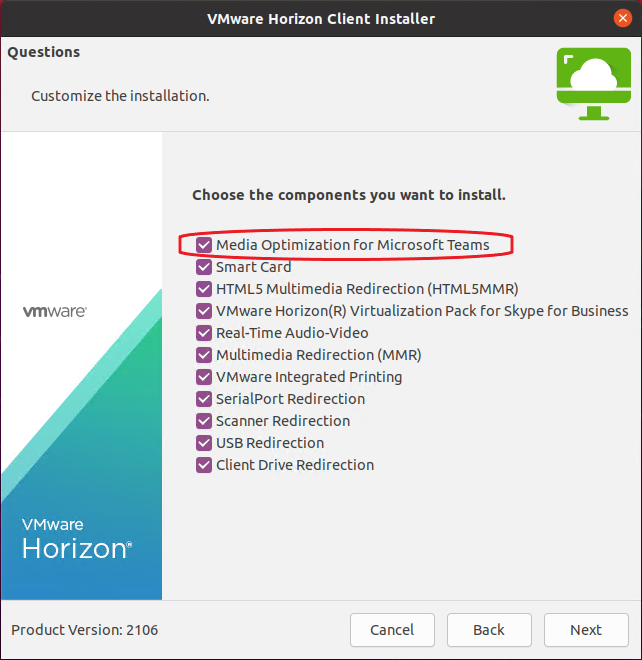 Microsoft Teams has become a key conferencing and collaboration tool for a number of businesses, especially during the pandemic. This past year gave the practice of remote work a dramatic boost, proving that the future of work is dynamic, with a global workforce in distributed locations, working wherever, whenever, and however they please. Now, with this distributed workforce being the new norm, communication tools are a critical part of any remote workforce strategy.

It can, however, be challenging to get video-conferencing solutions to work smoothly in a virtualized environment. Making a video call from a virtual desktop can present a data hair-pinning challenge that leads to network congestion. Microsoft Teams Optimization moves the video and audio communication out of the VM and onto the endpoint, reducing traffic out of the data center and usually improving the quality of calls for end-users.

While VMware already supports the Media Optimization for Microsoft Teams feature for Windows and Mac clients, we also wanted to give our Linux customers and user base the support they have been asking for, especially IT staff, administrators, and our thin-client partners. Linux end users will now get the benefits of redirected audio calls, video calls, and screen sharing.

With this feature, when audio and video calls are made using a virtual desktop, the Microsoft Teams media processing takes place on the client machine instead of in the virtual desktop and does not rely on the Horizon Real-Time Audio-Video (RTAV) feature.

Note: This feature may work with older Horizon 8 Agent and Horizon 7 Agent versions too, however, we recommend the versions mentioned above to get latest fixes, enhancements, and official support.

The supported client systems listed above are specific to the Horizon Client for Linux that VMware makes available. In addition, several VMware partners offer thin-client devices for VMware Horizon deployments. Many partners are working toward supporting Microsoft Teams Optimization. The features that are available for each thin client device, and the operating systems supported, are determined by the vendor and model, and the configuration that an enterprise chooses to use. For information about the vendors and models for these client devices, see the VMware Compatibility Guide.